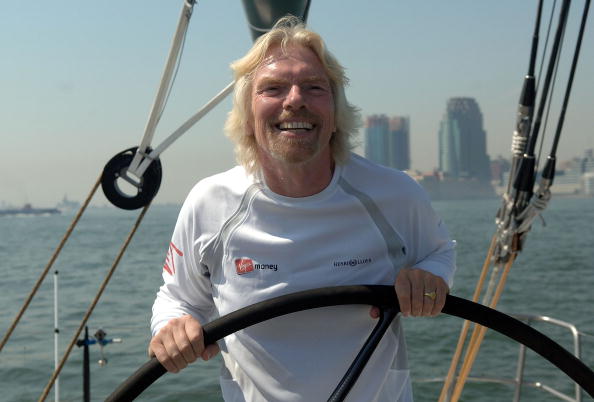 It’s sad to think about, but it’s also not always a sentence to failure — lot of major celebrities started with pretty humble means.

Take, for example, Richard Branson. The Virgin Group founder started his first venture as a teenager! In fact, he writes in a recent blog post, most people who come to him for business advice lament: “I need x amount of money to get started” — and it’s simply not true, says Branson.

“There’s no doubt it can be easier to achieve lofty ambitions if you already have financial backing,” he writes, “but in many cases, you don’t need lots of money to start a business.”

Branson is dyslexic and dropped out of school as a teenager. But that didn’t stop teenage-Branson from starting Student Magazine, his first business. His publication, launched in 1966, was an alternative to other interschool magazines and covered topics school magazines generally wouldn’t cover, like music and the Vietnam war.

He got started with a simple business plan, and in fact he kept track of advertisers and costs in his school notebook, and ran his magazine out of his parents’ basement. “I was just 16 years old when I founded the magazine, and had no money to put toward it,” writes Branson.

Funding came from a surprising place. Branson’s mother found a necklace on the ground near their home and gave it to the police. No one claimed the necklace, so police returned it and they sold the necklace for £100 and that became the launch money for Branson’s business. (£100, which equates to about £1,500 in today’s money or just about $1,900 USD).

Branson used the money to pay for magazine’s electricity and postage bills. “Without it, the business would have collapsed,” Branson writes.

That magazine was the start of Branson’s massive empire. He went on to create a mail-order record business, and that became Virgin Records. That brand now includes airlines, a music label and space travel.

Branson says that nowadays, success is even more reachable because unlike teenage him, we live in the digital age. He says technology has “dramatically” has decreased the costs involved in selling products or services and you don’t even need an office, you can work from your home computer. “Rather than commit to pricey premises you can set up online with no technical expertise using a website builder, and start selling from your kitchen table,” says Branson.

Funding is easier, too. “Raising finance to start a business from a bank has gained a reputation for being difficult, but today you can bypass this altogether with schemes that are dedicated to helping entrepreneurs launch, such as crowdfunding or Start Up Loans.”

“We didn’t need lots of money to start our first business and that’s even truer today than it was back then.”

Branson is tremendously wealthy right now, but he started out with nothing. That means we can, too. Never give up on your dream because of your current circumstances.

How to Empower Your Employees to Be More Customer-Centric
5 Leadership Strategies to Improve Team Performance and Grow Your Small Business
How To Close $2,000 Per Month Clients ($24,000/Year From ONE Client!)
4 Reasons Most Enterprise-Level Businesses (Still) Don’t Get Digital Adoption
3 Easy steps to complete your annual PPC checkup